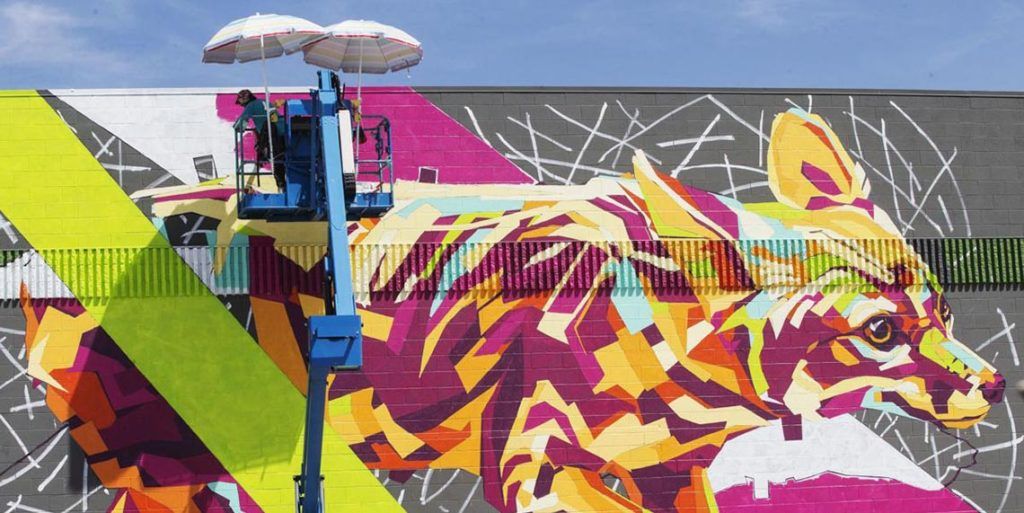 So when he arrived earlier this month to begin work on a piece on the south-facing wall between The BLVD and Temblor Brewing Co., he knew it would be a good one.

“He was very excited by the size of the wall when he got here,” said Kacy Johnson, Graff’s wife who helps schedule his projects. “It was bigger than he was envisioning.”

The 28-foot-high wall is deep in the process of being transformed by Graff. White lines that the artist laid down, reflecting his background in graffiti art, are making way for colorful patches of hot pink, orange, magenta, neon green and more as the project nears completion.

Once completed, the vibrant kit fox will be a focal point in the parking lot connecting the two businesses off of Buck Owens Boulevard, which was the aim of the Bynum and Mazzei families, which facilitated the project. (David Bynum is CEO of The BLVD and brother Don is co-owner of Temblor.)

“We wanted to activate the space,” said Marley Sherry, director of architecture and construction management for Gregory D. Bynum and Associates Inc., who worked directly with Graff and Johnson. “We’ve got a big wall there and wanted to bring something fun and colorful to make it a little more lively.”

Graff said the vividness of his work, which can be seen in Brazil, Turkey, Taiwan, Canada and throughout the U.S., draws in viewers.

“It’s all about the colors,” he said. “They (viewers) don’t necessarily understand the design but the colors make people happy.”

When it came to the subject, the Bynum team was interested in selecting a creature indigenous to the area, a departure for Graff, who is known for his urban works featuring non-city-dwelling polar bears, tigers, zebras and sea turtles.

“Normally when I paint animals, I pick different animals (that are) not from the place,” he said. “I like the contrast.”

Johnson added, “He likes painting animals in the city because we’re taking over animal habitats.”

Sherry said they were open to his ideas but also suggested a kit fox.

“He was not familiar with the kit fox,” she said. “He looked it up and fell in love.”

After finalizing the design and laying the lines, Graff works about 10 hours a day, sometimes aided by Johnson, a documentary photographer who said she “can also paint within the lines.”

Along the way, Graff found some tasks easier than others.

“Every project I have some sort of ‘surprise,’” he said referring to the band of textured bricks near the top of the wall, which he painted over four long days of detail work with a smaller brush.

He ends his days at either venue for food (fried artichoke hearts at Temblor, ahi tuna poke at The BLVD) and a beer (he favors Temblor’s Under a Blood Orange Sky).

“Normally I don’t drink a beer every day, but I go every night,” he said. “I feel local here, see the same people every night after work.”

Along with breaking bread together, Graff hopes to connect through his art.

The artist said he’s had many people stop by while he was working to ask questions or admire his work.

And he wants the discussion to continue. Like with many of his other pieces, his larger message is about highlighting endangered animals and for people to understand doing their part.

“Because nature is really big, I make these animals bigger in size than in nature, compared with the normal person.”

He’s looking forward to Monday’s event when he can meet people and discuss his work, which should be completed by then.

“It’s good to see the reaction from the people,” he said noting that he’s often unable to return later to see how his work fares.

Johnson said they keep an eye on social media to follow along.

“We see people post photos of walls and see how the walls are changing.”
Sherry said for the Bakersfield work they’ll use the hashtag #kitfoxontheblvd on Instagram.

And this isn’t the last work planned for the neighborhood, she said.

“We’re also hoping to do other murals on the buildings in the area,” Sherry said referencing Wynwood Walls, a destination spot in Miami with huge, colorful street murals created by artists from around the globe.

“I don’t know if we can achieve that kind of notoriety but we’d like to bring in artists and hopefully use some local artists at some point.”

But like so many things, it starts with that first one.