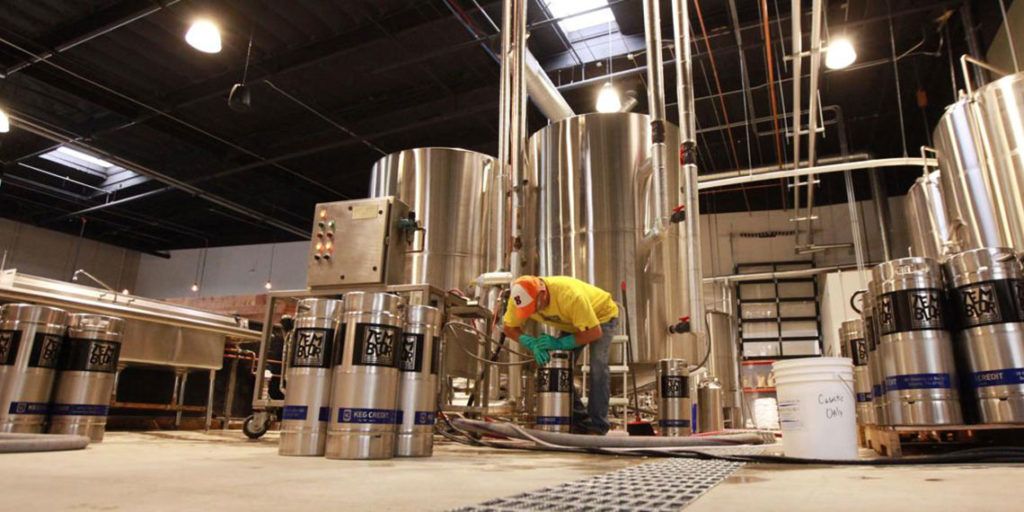 Fermenting a revolution: Temblor ready to tap the keg

It is early. There’s still only a pale promise of morning in the star-lit sky. But Mike Lahti is already at work inside a converted warehouse space on Buck Owens Boulevard. Thick green rubber gloves peek from the pocket of his shorts as he darts around the brew pad, an eclectic mix of rock and jazz pumping out of the sound system tucked under his stainless steel work table. The signs out front are brighter than the sky, beaming the Temblor Brewing Company logo out toward the big-rigs rumbling by on Highway 99 just beyond Zingo’s Cafe. It is almost time to make beer.

Lahti is the head brewer at Temblor, the new brewery, restaurant and concert venue that opens at 11 a.m. Monday at 3200 Buck Owens Blvd. He’s been brewing for weeks to build up the slate of beers that will debut at the Labor Day soft opening — an India Pale Ale, Belgian Wit, Kolsch, Belgian Pale Ale and Oatmeal Stout. But today he is building 5,000 pints of Meeting People is Easy, a Double India Pale Ale. Not long after 6 a.m. Temblor owners Tom Maxwell and Don Bynum roll in and start working their cell phones. They have to lock down an 11th-hour problem — a leak on the coolant system for one of the brewery’s fermentation tanks — before Lahti’s brew is done. Lati finishes setting up the brew, and Maxwell heads into a small room just off the brew pad to pour the last bags of two-row malted grain into the mill, which cracks the grain’s hulls so the sugars can be boiled out. They fire up the augers, and the grain swirls up through a system of pipes suspended from the ceiling and into the mash tun, a massive stainless steel brew barrel. Hot brew water mixes with the grain and the barrel begins to fill.

As the sun comes up, a steady stream of people begin trickling in through the loading bay doors; plumbers, the marketing and event team, the food and service staff, Lahti’s assistant brewer, a mural artist and engineering consultant. Lahti is moving constantly, checking temperatures, consulting with Maxwell and Bynum, prepping hoses and fixtures, tracking his progress on a brew chart and grabbing a sip of an energy drink when he can. Music flows with him. In a quiet minute, after measuring out the 38 pounds of Cascade and Centennial hop pellets that will give the beer its distinct bitter bite, Bynum, Lahti and Maxwell talk about how music will be woven into the fabric of Temblor. “I’m a musician myself,” Bynum says. “I’ve always thought in the back of my mind that Bakersfield needed another concert venue.” They stand in the storage room near a stack of keg-laden pallets in front of the black-draped stage where a string of concerts and comedy gigs will fill Temblor with live entertainment. “It’s a huge passion for all three of us and it goes really well with beer,” Bynum says. Lahti used to work in public radio and was a concert promoter before he got into brewing. He still has contacts in the music world and he’s working them to get acts to book at Temblor. “It’s not about the beer or the music. It’s a destination for both,” Maxwell says.

After more than an hour, Lahti finishes the “mash” and snaps open a series of valves to send amber-colored sugar-water called wort streaming into the brew kettle — a twin of the mash tun sitting on the opposite side of the brew platform. After a few minutes, Lahti pulls a sample of the liquid and pours it into a plastic test tube so he can test the “gravity” — the amount of sugars he’s been able to pull from the grains left behind in the mash tun. When the brew is done, those sugars will feed the yeast that will ferment the wort into alcohol. The more sugar, the higher the beer’s final alcohol content will be. The liquid tastes sweet and malty, like cereal water. Lahti isn’t satisfied. He makes some tweaks. Then, as Maxwell and Bynum tend to their phones, the plumbers work to fix the coolant system and his assistant brewer cleans kegs, Lahti fires up the brew kettle.

Now he’s on a hard timer. Beer isn’t just about sugar and alcohol. Hops — specifically the cone around a hop flower — add bitterness and flavors to beer that range from pine and citrus to fruit and coffee. India Pale Ales like Meeting People is Easy are known for massive hop bitterness. Lahti has to pour buckets of hop pellets into the boiling wort at specific times and it keeps him moving, even as he tends to a string of other tasks, like cleaning. His assistant Darren Van Scyoc rolls in a couple of bins with a hand truck. Lahti pops open a door on the side of the mash tun and turns on a rotating arm that kicks out clumps of steaming, soggy grain from the stainless-steel vessel. Then, in between hop additions, Lahti dons wadding boots and jumps inside the mash tun to sweep it out with a broom and rinse the last of the grain out. Then he climbs back out to prepare the final transfer of the wort — into the stainless-steel cylinder where yeast will turn it into beer.

The day is getting on. Maxwell and Bynum finish up their work. The coolant leak is fixed and they craft a plan to prevent future leaks. Then they head off to their day jobs in accounting and real estate. Lahti keeps moving. He says Bynum and Maxwell have given him a ton of creative freedom and a state-of-the art brewing system with which he can craft quality beers. Lahti plans to use six different grains, four different yeast strains and up to 30 different kinds of hops to craft. “We’re going to try not to be a run-of-the-mill brewery,” he says. He’s even gotten to name some of the beers. He’s especially proud of the name he cooked up for Temblor’s Session IPA, Long Monday, after country/folk singer John Prine’s ballad. Lahti takes a break and pulls a pint of Streets of Bakersfield IPA from the live taps behind the metal bar so he can sit for a video interview. The sun is climbing high in the sky, filling the patio along the front of the brewery with light and putting a glow into the polished wood of Temblor’s tables and chairs. Overstuffed couches and armchairs sit around a long table with succulents planted in the middle. Workers write out Temblor’s menu of beers on a chalk board. A cage shaped into the brewery’s logo hangs over the space. Lahti sips his beer and, the interview done, heads back to the brew pad. He plunks the beer down next to the empty energy drink. He grabs another sip here and there when he can. “I’m not going to waste a good beer,” he said.

Finally it’s time for the last transfer of the day. There’s a scramble for the right fittings to link transfer hoses, a burst of sanitation work and a bit of contortion to get the last connection in place. Then valves are turned and wort shoots through a cooling system that pulls off the excess heat from the proto-beer and sinks it into cold water in adjacent pipes. That water — and the captured heat — will be used for the next brew. A sealed container of yeast is plugged into the fermenter intake. And, as the fermenter fills, Lahti pulls a last sample of the wort before it becomes beer. He checks the gravity again and then takes a sip. The bitter tang of the hops explodes out from the underlying sweetness that remains in Making Friends. “They wanted a hop bomb,“ Lahti says. They got one.