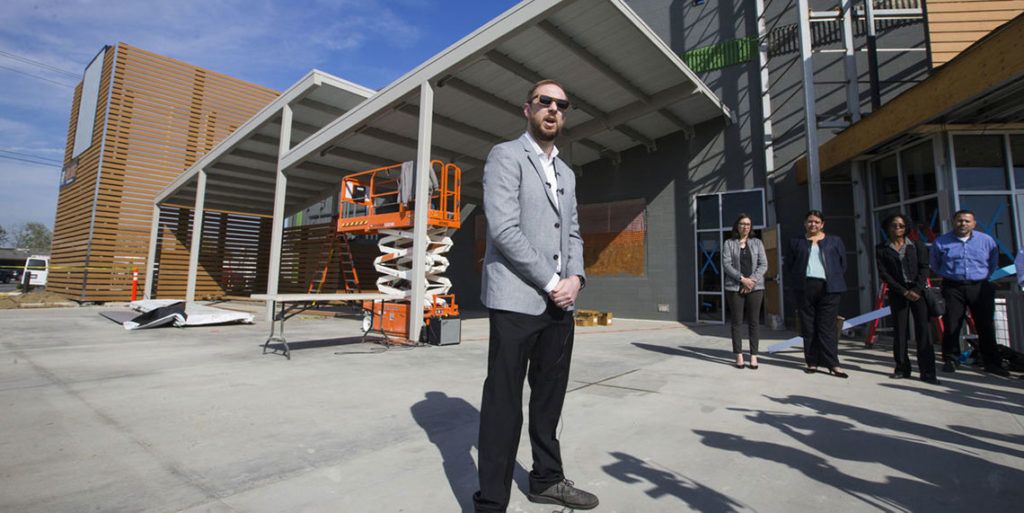 The BLVD bringing entertainment to Bakersfield next month

David Bynum knows what people say about Bakersfield — “There’s nothing to do here!” — so he’s doing what he can to address that.

Bynum is the CEO of The BLVD, a new entertainment spot set to open on Buck Owens Boulevard next month. The 45,000-square-foot space will have a restaurant serving a diverse array of gastropub fare, three full-service bars, 22 regulation-bowling lanes (eight of them in a private event area), laser tag, a ropes course, an arcade and two bocce ball courts.

The space will open first with a VIP event on April 18, which will benefit local organizations, before its official grand opening on April 19. The BLVD, owned and operated by The BLVD, LLC and Trifecta Management Group, joins the growing “entertainment mecca,” as Bynum called it, in the same area at 3200 Buck Owens Blvd., also home to Rush Air Sports (which he previously owned) and Temblor Brewing Co. (owned by Bynum’s brother, Don).

“The question was ‘What does Bakersfield need?'” Bynum said at a news conference on Monday morning. “I grew up here and the knock on Bakersfield is always ‘there’s nothing to do.’ I wanted to kind of provide an entertainment experience that I thought the community needed but didn’t have.”

The April opening of The BLVD is about a year in the making. With 35 local individual investors, the venue is a $7 million project, Bynum said. It might be a lot to bet on, but he knows there’s a crowd for it, especially since there’s so much going on at the entertainment complex.

“It’s really for everyone,” Bynum said, explaining that The BLVD will be a family-friendly space that becomes “more adult-oriented as the day goes on.”

There isn’t yet a planned cut-off time for if or when The BLVD will close to minors, but it’s something the management team will figure out, Bynum said.

The team at The BLVD, which is already employing 120 people, is excited to share its space with the community when it opens next month.

“There’s nothing like it in Bakersfield,” said Tino Lizaola, general manager. “We want to sell an experience.”

As Bynum said, it can be difficult to explain what exactly The BLVD is without just showing off the place. Here, TBC Media will break down all that there is to do there.

When you think of bowling at The BLVD, Bynum doesn’t want you to picture the typical bowling alley that hasn’t been renovated in decades or those smaller lanes often found in arcades. Bowling at The BLVD is the real deal and state-of-the-art. Unlike other lanes at entertainment complexes, league bowlers will be able to play at The BLVD and have their scores count for their league.

“For people that really care about bowling, we tried to do that right,” Bynum said.

There are 14 lanes in the main bowling area and another eight in a private area meant for parties. One of the venue’s bars will be right by the bowling area, in the center of the complex, while a second bar will be located with the private lanes.

TV screens tuned to various games will be all around the bowling lanes, making it a “sports-viewing haven,” Bynum said.

While lots of laser tag venues have a space theme, The BLVD is eschewing that for something distinctly more Bakersfield: the town itself. With oil derricks, local street signs (including Korn Row), Cal State Bakersfield’s Roadrunner mascot and that famous yellow Bakersfield sign, the two-story laser tag area is unlike any other. But don’t worry, there will still be blacklight and neon.

When people walk into The BLVD, there will be no missing the complex’s dozens of arcade games or the ropes course set up above it. Bynum said he wanted that visual to be striking. But don’t worry, anyone on the ropes course will be safely harnessed, keeping them from falling onto the gamers below. Arcade games at The BLVD will include newer ones like “The Walking Dead” as well as some older games like “NBA Jam.”

If singing in front of an entire bar is too intimidating, The BLVD offers an alternative: a small private room where a group of friends can belt out the hits without worrying about who might see or hear them. These kinds of rooms are common elsewhere in the world, but Bynum believes this will be new to Bakersfield.

In addition to the private bowling lanes, there are also three rooms for parties and events. The rooms are divided by partitions, which can remain open for larger groups. Prices for private parties will vary depending on the package and what guests want to do but range from $10 to $80 per person, Lizaola said. The party rooms are named after characters from “The Big Lebowski”: The Dude, Donny and Walter.

Come for the entertainment and activities, but don’t forget to try the food. Chef Briann Avila is the only one among The BLVD’s management who is not from Bakersfield, but her skills were worth bringing her in from Las Vegas, Lizaola said. The menu will feature gastropub, farm-to-table offerings, with everything from burgers to pizza to Cajun chicken pasta.

“We’re going to be doing more of an Americana style,” Avila said. “We’re offering everything just on a more elevated level.”

The food will be served throughout the venue, but those who want to enjoy their food away from all the activities can do so in the main eating area to the left of the entrance. That area is also home to another bar, one that serves both inside and outside on the patio.

There will be more than 50 beers on tap, including some from Temblor, The BLVD’s neighbor. Bynum also plans for the venue to have excellent cocktails, as well as some good non-alcoholic drinks.