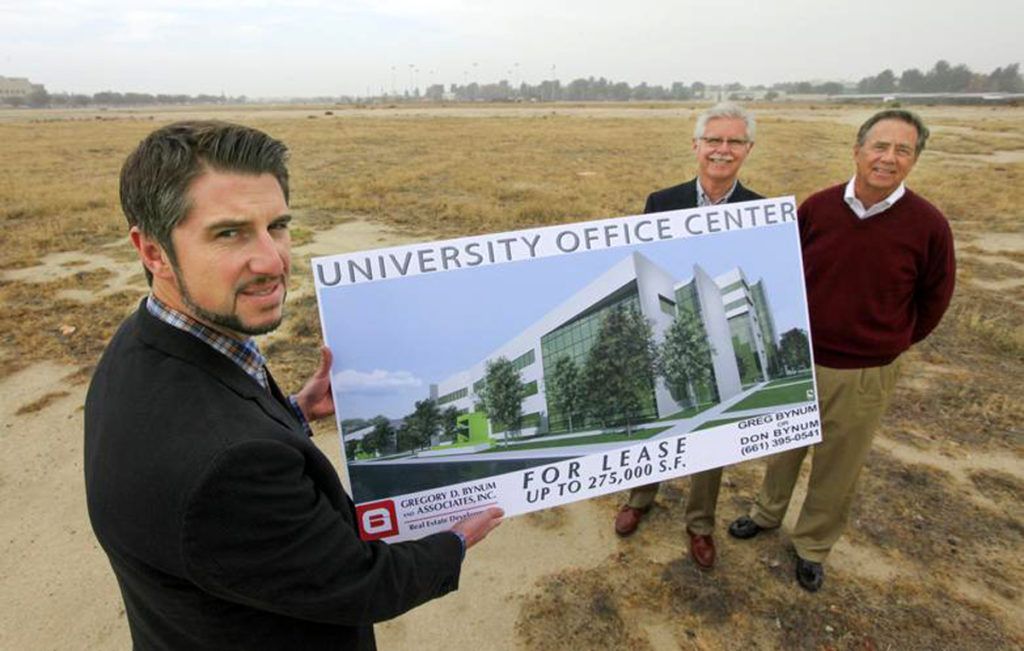 BAKERSFIELD, CA — After a tough few years, business space has become a prized commodity in and around Bakersfield, with demand for some property exceeding pre-recession levels.

Led by warehouse work and other industrial activity, the area’s commercial real estate market is posting across-the-board improvement in vacancy rates. Some developers have responded by building, or proposing to build, new industrial space, offices and retail space.The local market is almost superlative by one measure: Bakersfield’s 4.1 percent warehouse vacancy rate at the end of September was the nation’s third-lowest, behind only Honolulu and Los Angeles, according to Colliers International.”Bakersfield is proving to be the gem of the Central Valley,” Bakersfield industrial real estate broker Wayne Kress noted in an email highlighting local strength in energy, logistics and agriculture.

The tightening market speaks well of Bakersfield’s economic prospects. While not all the property uses are part of high-paying industries, they nevertheless contribute jobs that support local services and bolster the housing market, which, in turn, generates additional employment.

“In the long run, these new properties provide the infrastructure that is essential to attracting new companies that further build our economic base in areas such as logistics and energy-related support services.”

Even retail, the weakest category of Bakersfield’s commercial real estate market, is posting substantial gains from the depths of 2010 and 2011. Properties left vacant by the recession are beginning to fill up, and chains such as Walmart are poised to expand locally.

This sort of staggered progress is to be expected, said Bakersfield commercial broker Anthony Olivieri. Jobs generated by industrial and office activity tend to feed the home market, which he said is what outside retailers study when making decisions about where to grow.

“The big picture is that retail does trail, generally, the job creation out of the industrial sector and the office sector,” Olivieri said.

Here is a look at how each segment is faring.

Probably the best news is that industrial property in the area spanning Bakersfield, Shafter and Tejon Ranch reached a vacancy rate below 3 percent at the end of 2013 — a huge improvement from the 11 percent recorded just three years before, according to data provided by Cushman & Wakefield | Pacific Commercial Realty Advisors.

Oil service companies account for much of the activity — not surprising given barrel prices in the $100 range. But national retail chains have also contributed by filling up huge so-called “fulfillment centers” and other warehouse space in Shafter’s 1,400-acre Paramount Logistics Park. Ross’s big move came in March, when it bought a 158-acre property inside the development served by the BNSF Railway’s main line. The retailer has since begun construction on a 1.7-million-square-foot distribution center expected to create 1,500 new jobs.

An 85,000-square-foot speculative development near Meadows Field airport has attracted three new tenants — Pactiv Corp., Safelite AutoGlass and Midwest Hose & Specialty — next to the U.S. Postal Annex along Pegasus Drive. Kress noted it is the first “spec” project in the airport area in five years.

Roll Global has proved itself a major player in local commercial real estate even in Bakersfield. It is moving forward with an 80-acre development called the CrossRoads Business Park between Harris Road and Panama Lane west of Gosford Road in the city’s southwest. Office, retail and light industrial uses are planned.

Not to be overlooked is the Tejon Ranch Commerce Center near the foot of the Grapevine. Already home to distribution centers for the likes of Ikea and Famous Footwear, it added a 400,000-square-foot warehouse for Caterpillar Logistics Inc. in 2012.

BACK AT THE OFFICE

Nothing speaks to optimism for the local economy like new office construction. That has begun to happen in Bakersfield, and there’s reason to believe more is on the way.

It isn’t happening everywhere in the city, however. Local commercial real estate people say the sweet spot is the southwest part of town, specifically the area around Cal State Bakersfield.

A two-story office building recently opened at 11200 River Run Blvd., not far from the university, and brokers at Newmark Grubb ASU & Associates say there’s talk of work beginning at other lots soon, depending on the success of pre-leasing marketing campaigns that began in 2013.

One such effort is Stockdale Centre, a project that ultimately could consist of 270,000 square feet of office space across Coffee Road from the Town & Country Village shopping center along Stockdale Highway.

Another office project in the planning stages is Gregory D. Bynum and Associates Inc.’s proposal for up to four buildings comprising 283,000 square feet on CSUB land at the northwest corner of Camino Media and Scarlet Oak Boulevard. It, too, would be built in phases, starting with a three-story structure expected to begin construction this year.

A less promising but significant development is State Farm’s bid to sell its hulking, 556,000-square-foot office complex at 900 Old River Road. The insurer announced in August that it hopes to sell the property as part of a package involving 23 North American locations. Any buyer would have to give State Farm the option of leasing the complex for up to 15 years.

Judging only by the numbers, the local market is tightening up, with five consecutive quarters of office vacancy rates below 9 percent, according to Newmark Grubb data. That compares favorably with a high exceeding 11 percent in early 2011, near the worst of the Great Recession.

(By comparison, Newmark Grubb reported that Fresno’s office market was 15 percent vacant at the end of September, which was the latest figure available.)

Still, Bakersfield’s vacancy rate is nowhere near the historic lows of about 4 percent in early 2007, when the real estate boom supported a plethora of mortgage and real estate offices.

It may not be obvious from looking at the numbers, but people who deal in local store and restaurant space are optimistic about Bakersfield’s retail market.

The area got a much-needed jolt over the last few years as dollar stores moved in when the recession was at its worst. These, combined with progress Walmart has made securing approval to build new stores in the greater Bakersfield area, kept the retail market in growth mode.

At the same time, many other shopping centers, including upscale retailers, are doing well in certain parts of town.

A prime example is The Marketplace along Ming Avenue. Although it has lost tenants recently, including local independents Russo’s Books and Anna’s Cards & Gifts, the shopping center has had no trouble finding high-caliber replacements.

“We basically have all that space committed,” said Olivieri, the broker who specializes in retail property.

Another high-profile shopping center, East Hills Mall, hasn’t done as well. With gaping vacancies going back five years and more, the property has long been a drag on the city’s vacancy rates.

But local investor Clyde Barbeau, working with Modesto-based Save Mart Supermarkets, has pieced together all but one of the mall’s parcels. Together they hope to buy the last piece from a Spanish company that owns the former Harris space, which measures 104,000 square feet.

“In the meantime, we’re trying to market it, obviously,” Barbeau said. Although negotiations with possible buyers are ongoing, he said it remains far from clear what will ultimately become of the mall.

Across town, Winco is about to open a new, 90,000-square-foot store at Panama Lane and Ashe Road as soon as next month. It’s expected to provide 200 new jobs.

In another positive sign, Hobby Lobby opened a 50,000-square-foot store at the former Mervyns space along California Avenue in October.

The debut went so well that the Oklahoma-based chain soon agreed to lease an additional 25,000 square feet of space next door just to meet customer demand.

Things are beginning to happen — or not, as is sometimes the case — in some of Kern County’s high-profile commercial properties.

The Outlets at Tejon Ranch

This 320,000-square-foot outlet under construction near the foot of the Grapevine has signed leases with at least 16 tenants, among them Aeropostale, Coach, Hot Topic, Skechers, Tilly’s and Wilsons. Serving more than 3 million residents within an hour’s drive, the center is expected to support about 1,000 jobs.

Roll Real Estate Development is in the process of subdividing this 80-acre project between Harris Road and Panama Lane west of Gosford Road. Set amid a residential area of southwest Bakersfield, the proposal is for office, retail and light industrial lots ranging in size from 2 to 10 acres.

Despite the recent loss of its proposed anchor tenant, a 3,500-seat baseball stadium, property owner World Oil Corp. hopes to begin construction this year or next on the retail portion of this office, residential and entertainment center project at the corner of Coffee and Brimhall roads. Some question remains as to what the development will ultimately look like, as California high-speed rail is planned to shear off about a sixth of the property.